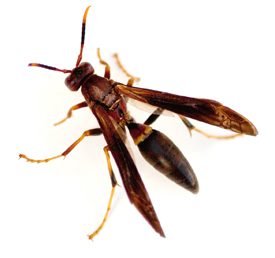 There are multiple species of wasps and hornets in Houston. These stinging insects can present a serious problem to anyone with allergies to their venom, and can be a painful nuisance for everyone else.

Treating for wasps and hornets should be done with caution. The nests of some species can contain hundreds of individuals, and these insects will swarm if they feel threatened. Hundreds of wasp stings can land even someone who isn't allergic to their venom in the hospital in very serious condition.

Large nests should always be removed by a professional, and those with allergies should contact an exterminator for any kind of wasp infestation.

The baldfaced hornet is a large, with a body length of up to 3/4 of an inch. They have shiny black bodies with contrasting white markings on the head and abdomen. Although they are called hornets, baldfaced hornets are actually a species of wasp closely related to yellowjackets. They share some of the yellowjacket's aggressive tendencies and have a very painful sting.

Baldfaced hornets make their nests by chewing up old wood into paper. Their nests have a distinctive upside-down pear shape with an entry hoe near the bottom. Nest can be very large, often between two and three feet in length. While they will usually nest in trees, baldfaced hornets will sometimes build nests on the side of a building.

How Do I Get Rid of Hornets?

Attempting to remove a baldfaced hornet nest on your own is an extremely bad idea. Nests will contain several hundred adult hornets, each capable of stinging, and these insects will become very aggressive and swarm if their nest is disturbed. Call a professional.

There are multiple species of solitary wasps commonly called mud daubers, all named for their habit of building nests from dried mud. These wasps are all around 3/4 of an inch to 1 inch in length and have different body colors depending on species.

Mud daubers are generally non-aggressive and only become a problem pest if they build their nests on porches or inside garages or sheds. Some species, like the blue mud dauber, are actually beneficial as they will hunt and eat black widow spiders. Of course, this means that if you see blue mud daubers around your home it's probably a good idea to check for black widow spiders.

How Do I Get Rid of Mud Daubers?

Because mud daubers are solitary, they are fairly easy to get rid of, since it involves killing only a single insect. When eliminating mud daubers, it's important to not just destroy the insects but to remove the nests. Abandoned nests will often become re-occupied by new wasps. While mud daubers live alone, in the right environment there can be multiple nests in close proximity to each other. If you have a recurring problem, a professional can track down and eliminate these nests for you.

Paper wasps are named for their habit of building nests of cellulose, which they produce by chewing wood. These nests are most often found under the eaves of home, and are composed of a cluster of thin-walled, closely-joined hexagonal tubes. Mature nests can contain over 100 of these tubes. Paper wasps will vary in size and color depending on the species, and can have markings that range from an overall reddish brown to black and yellow stripes that closely resemble a yellowjacket.

How Do I Get Rid of Paper Wasps?

With caution. Paper wasps can be aggressive and a single individual is capable of stinging multiple times in one attack. Because their nests are essentially glued to the wood they are attached to, removing paper wasp nests can be physically difficult. Attempting to remove an occupied nest will usually result in an aggressive attack from the insects. For large nests, call a pest control to exterminate the insects before the nest is removed.

Southern yellowjackets are smallish, stinging insects that rarely grow more than 1/2 an inch in length. They are recognizable by their black bodies with bright yellow markings on the head and abdomen. Yellowjackets will usually nest in underground burrows, although the have also been known to build their nests in the walls of houses. Yellowjackets are a particularly problematic pest in Houston because the mild winters allow colonies to survive and expand from year to year. Nests can grow to cover an area several feet wide and can contain thousands of individual insects.

How Do I Get Rid of Yellowjackets?

Eliminating yellowjackets requires killing the queen, which is made difficult because their nests are often built in inaccessible areas. If you think you have yellowjackets nesting n in your walls, call a professional. 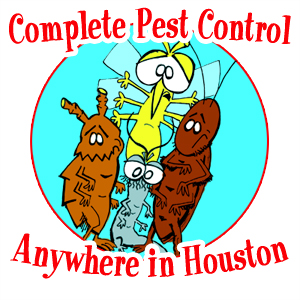